Arts Muse is delighted to have a chat with Paul Dudbrige, director of the new British Web Series ‘Horizon’ 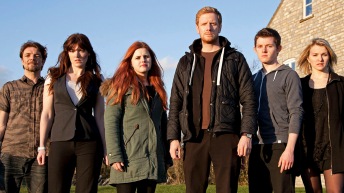 Hi Paul, the web series is a very exciting Sci-Fi thriller. However, your career started out with the horror film Coldharbour; you have made more humanistic films since then, why did you make the move to Sci-Fi?

I do like drama. I like hitting those emotional beats in the characters and story and my past work has focused on that aspect. I’m also a fan of sci-fi films and shows as well as action films so when the idea for this came up I thought it was a nice way of combining all those elements together. At the heart of any story whether it’s sci-fi, horror or action should always be the human interest and successful films and shows in those genres are only better because of that. I hope we pulled off trying to inject the drama underneath the sci-fi and action elements in Horizon.

Why did you choose to do a short web series?

Well, I like the TV drama format. I’m a big fan of House of Cards,The Walking Dead etc. Having that format but shorter as a web series appealed to me. We liked the idea of using cliffhangers at the end of an episode and making the audience come back for more. It seems to have worked! It’s something you couldn’t do with a film as a completed piece and only works being broken up in to chunks. We have been asked about cutting the series in to one film for TV and we’re happy to do that, but it was written specifically with those suspenseful endings in mind.

Why did you choose Bristol as the main scene of the web series?

We all live here and we love this city. Not only is it very picturesque for filming but also it made sense to set the show around our home town for logistical reasons. It’s not just the setting though, as we decided to make Bristol a feature by stating the alien ship has only come to Bristol and nowhere else in the world, so it is significant for story purposes too.

You used a particular camera style and strong visual effects, why did you choose to approach it the way you did?

The style came out of necessity and also the look we were going for. The hand-held, of the moment feel, was something that I felt added an element of anticipation to the proceedings but also made it quicker for us to shoot on the day. The problem came when integrating the visual effects elements as the camera also had to be loose on those shots and even going as far as having that style added to the shots that were completely CGI.

I have a little bit of experience of shooting with visual effects from past projects so knew roughly what we could and couldn’t do. It was always going to be a challenge and I love that. If it was easy, not only would everyone do it but also it wouldn’t be any fun. The effects had to be good or as good as we could make them, which is why they took so long to produce and made our post-production schedule 18 months long! What I do like about working with visual effects is that there are some that are in your face like the ship or fighter jets, but then there are some that are really subtle that get past the audience. We changed the skies in shots to make them more interesting, we put images on mobile phones and just had some shots that physically don’t exist as a location. So I’d shoot elements like a row of cars, a building and sky and our effects guys would composite them all together to make the location that we needed for the story to work, that in the real world you could never film. My hero for this type of work is ‘Forrest Gump’ and ‘Back to the Future’ director Robert Zemeckis. There are so many effects in his movies that you don’t realise are effects and he is the master of sneaking that past you.

Are you working on other projects as well in the meantime? What else can we expect in the future?

I have a slate of feature films that I’m working on with a Producer friend of mine. We have the first one, “Breathe”, which is a hospital/siege thriller ready to go in to production next year, so my focus is now on that. At some point I would like to come back to Horizon too… Revisiting that world and those characters would be quite fun.

Thank you for your time Paul and we are very excited for the next webisode of Horizon on http://www.horizonwebseries.com.