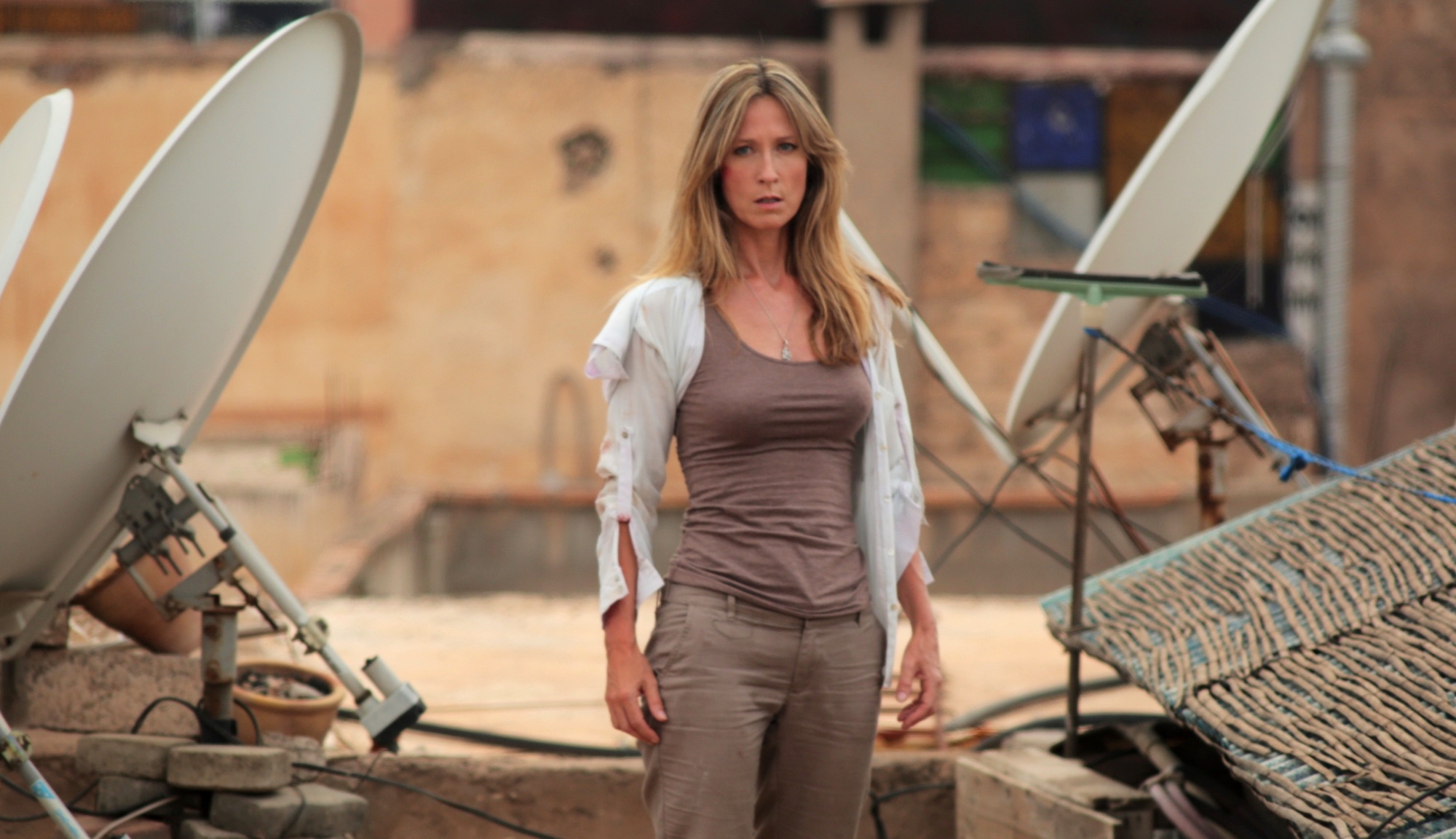 Directed by acclaimed filmmaker Howard J. Ford (The Dead, The Dead 2: India), Never Let Go follows a single mother desperately searching for her missing child in a beautiful, but unfamiliar land, following an apparent abduction. Trusting no one, she takes the law into her own hands, weaving her way through the murky backstreets and barren landscapes, now implicated in the murder of a seemingly innocent man, her connections back in the US begin to reveal that there is much more at stake than first meets the eye.

We were incredibly lucky to chat to Angela about her lead role, her influences, and what makes Never Let Go stand out from the crowd.

Firstly, thank you for your time, Angela! We absolutely loved Never Let Go. As an actress, what was different about this character from others you have played?

The main difference for me playing Lisa Brennan is not necessarily her character but the fact that she is the driving force of the film. I have often played leads in theatre and in film but I have never had the experience of carrying a film before and let me tell you there is a huge difference both in the skill needed but also in the pressure that is put on you. I felt that pressure intensely and there were times in my preparation and on set when I was almost paralyzed with fear. To combat this, I prepared within an inch of my life. I notated my performance a little like a composure. You have to choose what to show and when so that it fits into the arch of the story. I made an emotional, mental and physical storyboard for myself so that I could chart the subtleties of her journey, hit the right notes at the right time and know where I was shot by shot because, of course, we were filming out of sync with the story line and often ad hoc.

The film also has a great supporting cast. What was the atmosphere like on the set?

Yes, I was so lucky to be supported by such a strong cast and genuinely great people. Acting should be a collaboration between artists. If you are not surrounded by talent and good will, it is very hard to do your best work. In fact, for me it’s almost impossible. It was a very tight knit team, which is essential on independent projects run on a skeleton crew, tight budget and sometimes painfully long shoot days. However, the atmosphere on set is always dictated by the person at the helm and Howard Ford created a relaxed inclusive atmosphere where everyone was empowered to do their best.

Did you do any training to prepare for the more physical scenes?

I did all my own fight scenes and stunts so I needed to be in peak physical condition.  I am always fit but as soon as I knew about the film, 9 months before, I upped my training. Nearer the shoot I was doing 2-3 hours a day of running, weights, boxing and combat. Training hard also helped me to keep my focus with the pressure I was putting myself under.  I was very fortunate to have three people whose expertise and support really kept me on point.  Steve Cole, my personal trainer, who got me in shape, Liz Robson my physio who kept on mending me as I broke a lot and Paige Walker who trained my voice with forensic precision – I was in as much pain practicing the American accent as I was pumping iron.

What I love about Never Let Go is that it shows that women can be heroes too. Many dramas focusing on this topic are told from the male perspective. ‘Taken’ and The Missing’ spring to mind. It is so refreshing that we see it from the perspective of an individual who has the strength to do what it takes at any odds to get their child back and she happens to be a woman. Lisa needed to have physical skill and strength but I didn’t see it as defining her as a person. It was crucial in my mind that she was a fully rounded real woman.

The balancing act for me was between capturing her strength and her ability to take action with her fragility. She’s a psychologically vulnerable woman, abandoned in a foreign country in horrific circumstances with nobody to help her. The challenge was how do you make a woman in such a heightened state of anxiety displaying some erratic and aggressive behavior sympathetic? Howard and I spoke a lot about the necessity to bring out her vulnerability as well as her strength. That meant in certain scenes I really had to play against the obvious.

What was it like collaborating with Howard J. Ford on the project?

Working with Howard Ford, was very special. He is a filmic alchemist and the nicest man in the business. I was so safe in his hands, there was an intrinsic trust, respect and care in his direction which really enabled me to use my craft. It made the conditions we were working under so much easier to navigate.  This was guerilla filming, tense, on the edge and spontaneous.  I needed to be on my mettle. There were many times when we were so in sync there was no need for words. That was a great feeling.

We were so pleased to see such a powerful female character leading this film. Are roles like that important to you as an actress?

Absolutely – yes! It is so rare to get a leading role as a woman – we are still drastically underrepresented in story-telling. I am becoming increasingly passionate about redressing that imbalance and think it’s essential that we start to hear and see more fully rounded female characters existing in their own right. We are 50% of the population, it’s time our stories were equally represented.

This film would have passed the Bechdel test with flying colours. For those people that aren’t familiar with it, the Bechdel test asks if a work of fiction features at least two [named] women who talk to each other about something other than a man. It’s great that it exists but its existence is so telling of the gender bias in storytelling. 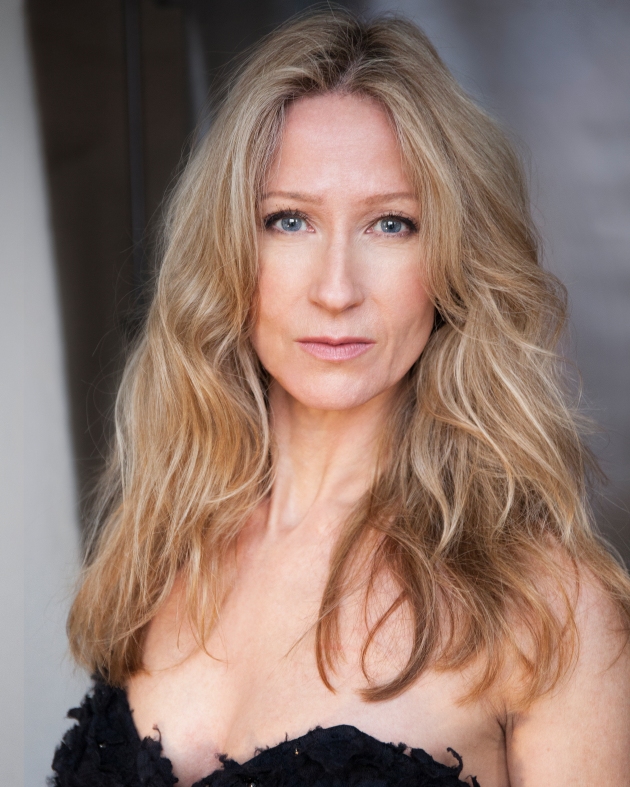 Are there any actors or directors you particularly admire and who have influenced you?

A major influence for me was working with the late Stefan Gryff.  I took part in his one to one screen acting tutorials for 8 years.  He gave me guidance, brutal feedback, and had 100% belief in me.  Stefan is the reason I continued as an actor, especially in the early years, which were tough.  His belief in me and the opportunity he gave me to hone my craft absolutely underpins my work today.  Howard Ford has had a huge influence on my life creatively and now as a friend. He gave me the opportunity of a lifetime. He had the courage to cast an older, unknown actress who he knew was 100% right for the role. He enabled me to show what I am capable of and for that I will be eternally grateful.

In terms of other actors who I admire, I love Jessica Lange for her edge and raw emotion; Meryl Streep for her intelligent detailed characterization and Robin Wright who was just mesmerizing in ‘Wonder Woman’.  I would have loved to play that role!

As for directors, I love Peter Kosminsky who I had the pleasure of working with, albeit briefly, at the beginning of my career on “No Child of Mine”, Noah Baumbach, Paul Feig, Clint Eastwood, Tom Paton – really there are too many to mention.

How did you get into acting?

I had always wanted to be an actor growing up but I didn’t really think that it could be more than a dream. Then, at the age of 16, I played the part of Barbara Allen in ‘Dark of the Moon’ at college and it appeared that I had some talent. At that point it started to become a reality for me. I studied drama at college, University and finally I went to drama school. I’m a grafter and work hard to create my own opportunities in the business. Most of the work I get is from recommendations via the connections I have made. It’s quite brutal out there – you can never let the grass grow under your feet!

Are there any types of roles/characters you’d be interesting in tackling next?

When I was at drama school one of the teachers said that I had “a strange strength in my vulnerability” and interestingly I would say now that the ability to convey vulnerability and strength is my brand. I was greatly miss-understood at drama school and sometime in life. When you are essentially a ‘nice’ person people also often assume that you are weak, it gives them an excuse to underestimate you. As a person I am both gentle and tough and I bring that quality to the roles I play. However, I would love to work more in comedy. I do a lot of improvisational work outside my film career, which often involves making people laugh. I would love to exercise this part of my craft more – I can be funny.

What do you have coming up?

I have literally just wrapped an amazing Indie sci-fi action film called ‘Black Site’ by Tom Paton [Pandorica, Redwood] where I play the head of an Alien deportation unit.  She’s a sarcastic, no messing boss lady which is such fun to play.  Next week I start filming ‘Homeless Ashes’ a British indie feature film created by Marc Zammit, with Jason Flemyng, Lew Temple and Madalina Bellariu Ion.  This time I will be playing an abused wife and mother of a boy who runs away from home.  A very different project but again great to play.

Never Let Go is currently available to watch on Netflix, iTunes, Amazon and Google [amongst others]. It is also in store at Walmart.