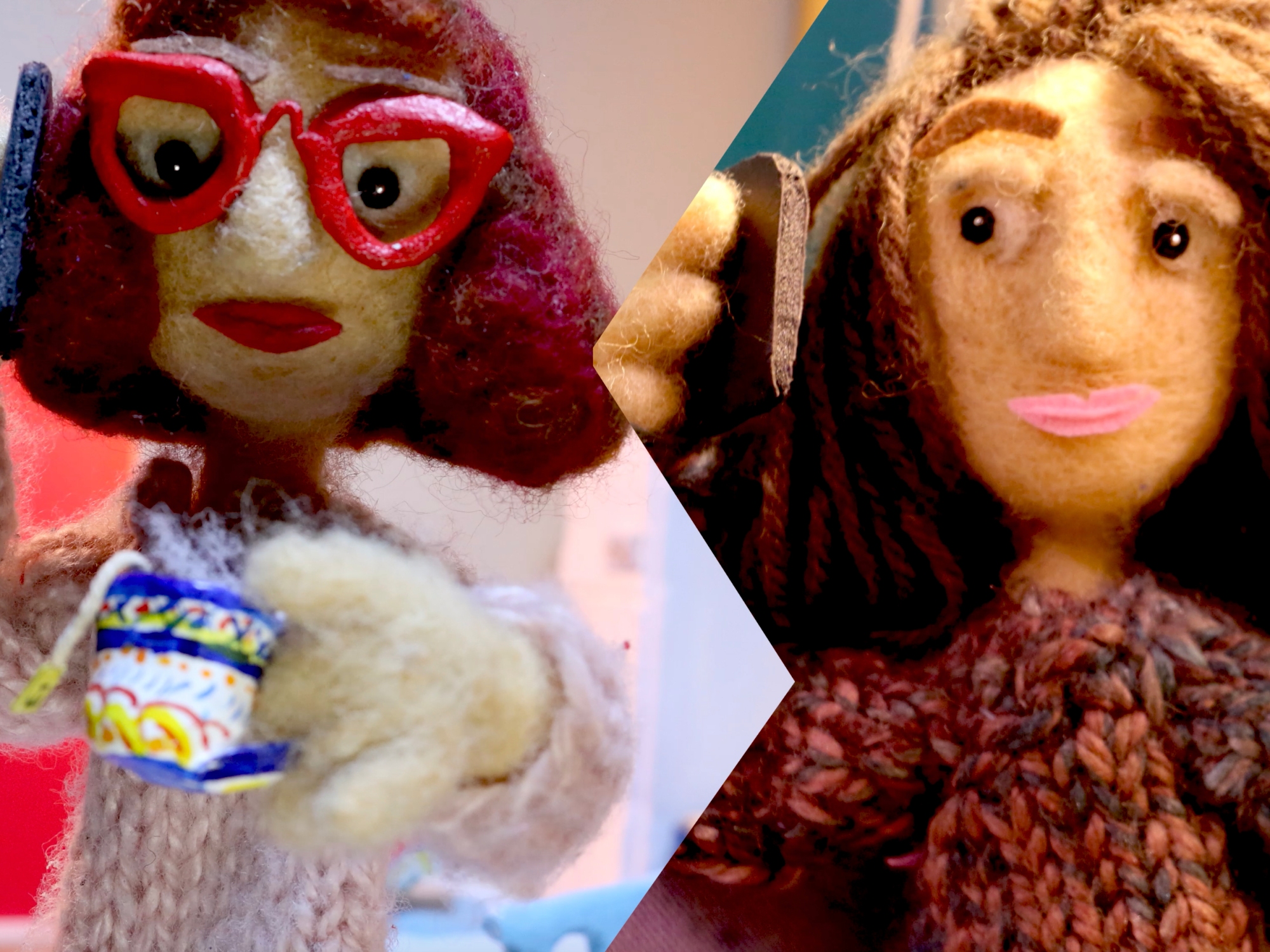 We have the chance to sit down with director Lizzy Hogenson to talk about her touching stop motion animation, Dani. Animating a conversation between Dani and her mother discussing an update in her cancer treatment, Lizzy chats to us about the true story behind the short and it’s festival success. 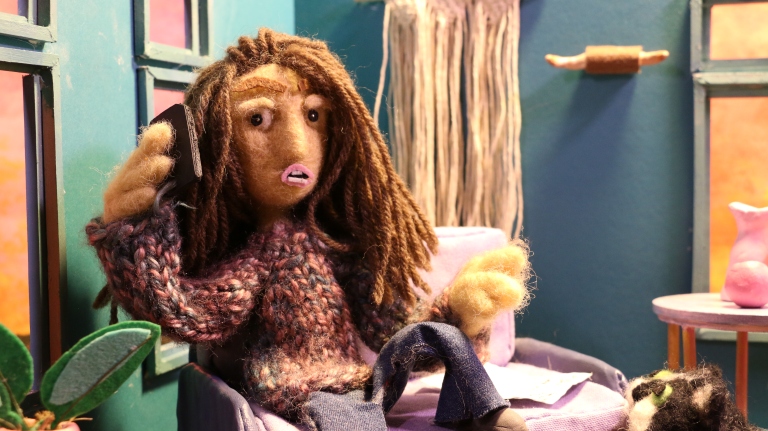 Tell me about the first time you met Danielle.

About 3 years ago, I decided to make a big career change.  I had established a solid career path on Wall Street, but was constantly overwhelmed by this nagging feeling that I wanted something more out of life.  I moved out to LA to pursue a film studies MA at USC, with my belonging piled in to my tiny car and a friend’s place I could stay at for a few weeks.  While looking for a cheap place to live, I met Danielle through a Craigslist roommate posting.  We got along right away, as we had a lot of shared interests.  On the weekends, we would take turns making French toast, go plant shopping and thrifting, and then binge Netflix.  She was a great roommate and an excellent friend.

Tell me about the day she told you about her illness and how it made you feel.

Danielle hadn’t been feeling well for several months.  She’d had to take quite a bit of time off work.  I knew something was wrong, but didn’t expect to hear that it was cancer.  You just don’t assume that with someone who is 30.

I got the news over a group text message with our other roommate.  One of the things that Danielle talks about in the short is how difficult it is to share bad news, which is why she started a podcast and blogging during her treatment.  It’s hard sharing that sort of news, and anyway you can convey information more directly and accessibly helps focus in on what matters.

How is Danielle doing? I understand that Danielle has started a podcast with her two best friends. Has the podcast been a therapeutic process for her to deal with her illness as she talks about it?

Danielle started the podcast “Well This Sucks” with her two best friends from college at the start of her diagnosis and treatment.  As I mentioned, it was both a way to keep everyone updated but also talk through her feelings.  She wrapped the podcast about a year ago, since it was just too overwhelming to balance that with work and her treatments.  But, in its run they had on some great guests and got some good traction.  I highly recommend checking it out.

As for how Danielle is doing, the call featured in the short was recorded about two years ago.  She had undergone one round of chemo, which hadn’t stopped the cancer.  After the call, she went through two more rounds of chemo which seems to have at least managed the cancer.  She’s at a point now where she can talk about and make plans for the future.

Tell me about the animation process behind the film.

I fabricated and animated everything in the film myself.  The entire process took about 4 months.  I made a makeshift stop motion stage by taking the sliding doors off of my closet and placing a desk in there.  So, I was literally breathing and sleeping with the story for several months.  I also had to think logistically about my plans, and make sure I wrapped each set before moving on since I had to dismantle each set, because of space constraints.  As for the animation, it was basically three months of moving the puppets frame by frame, everyday for 6 to 12 hours.  There were definitely a lot of moments where I wanted to give up or was really frustrated, but my fundamental belief that it’s an important story kept me going.  It really means a lot that the film is resonating with people and I’m looking forward to sharing it with more and more audiences.

Why did you decide to tell this story in animation form?

As for why to tell this story through stop motion animation, I think that any animation is particularly personal and intimate, but there’s something particularly special about shaping and forming the story with your hands.  It’s like you’re imbuing the story with a little bit of yourself.  For such a personal and intimate story, I think the stop motion animation lends this warmth and personal touch with really helps the story.  It’s a bit to digest, but the whimsical aspect of stop motion makes it more palatable.

How has the film festival experience been for you?

There’s definitely been a learning curve about the whole festival world, and each festival is unique.  I definitely showed up to my first festival completely clueless about the entire process.  I’m also more on the shy side, so I can find the Q&A and networking aspects to be really nerve wracking.  I have to sort of prep myself ahead of time.  That being said, they can also be a lot of fun.  They’re often in beautiful and interesting locations, and all of the festival organizers have been so incredibly nice. I secretly kind of want all of them to be my best friends.  They’re such unsung heroes of the film world.

How does Danielle feel about her story being such a success and winning high profile Awards?

Like me, Danielle has been really moved by the warm welcome the film has received.  It’s really meaningful that her story is resonating with so many people.  We hope that it will continue to garner attention and impact people.

I think I gravitate towards women’s issues from the mere fact that I am a woman and I experience the reality of being female everyday.  I could rattle off statistics about women in the film industry, but you can find far more compelling data and information from the Gena Davis Institute.  Women are particularly venerable when it comes to health issues and ageing.  There are studies about how women’s pain isn’t treated is seriously as men’s, and the situation is even worse if you’re a woman of colour.  Women are also more likely to experience poverty as they age.  I think that by telling women’s stories, or at least stories through the lens of women, it builds visibility and gives a voice, which is very much needed.  Women’s issues, though, are ultimately society’s issues.  By looking at these stories, it will help all walks of life.

What is the main message you want people to take away from the film?

First, I hope people see it and think about the important relationships in their lives.  The connections and support we have are so critical to the unpredictable nature of life.

Second, and this is from behind the scenes, Danielle had to continue working full-time while undergoing cancer treatment in order to keep her health insurance.  In fact, she had to pick up a part-time job to help pay the bills.  Our healthcare system is in desperate need of reform, when a woman undergoing chemo for stage 4 cancer has to work full-time to receive the lifesaving treatment that should be a basic human right.  We can and should do better.

Where is the film headed next?

What projects do you have coming up?

I have a few projects I’ve been working on.  I recently filmed a death doula and I’m working on a short animation from that interview, which I can hopefully use to expand the project into an exploration of the death industry and what constitutes a “good death.”  A lot of what I think about is how we do many things in unnecessarily complex ways, and dying has become one of those.  I’ve also been working on a project about Alzheimer’s and ageing.   We tend to group a lot of cognitive issues related to ageing under one incurable umbrella, when it’s often a complex series of symptoms related to the individual.  I started on this one when I found out that my childhood ballet teacher was diagnosed with Alzheimer’s, and became interested in her struggle of navigating her diagnosis as woman with no real family and limited resources.  Sort of like the death doula project, I guess I’m interested in exploring what it means to age and how we can remove unnecessarily suffering and financial burdens from the process.

I like to keep my projects smaller on the budget side, since the most important thing to me is to be making something.  I always try to have something, no matter how small, that I’m working on.

Congratulations on your film Lizzy and thank you for sharing such an important story like Danielle’s.

Thank you for your time!