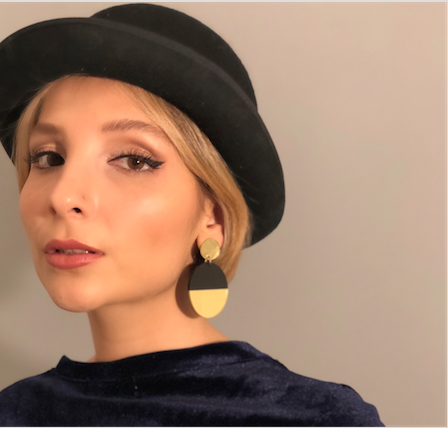 We had the pleasure of speaking with Sonia K. Hadad, the amazing female director behind the short film Exam which has been taking film festivals by storm and winning high profile awards. We are able to chat with Sonia and ask her whether the film is based on her own actual life experiences, what she wants people to take away from the film, her new upcoming projects, and much more.

What was in it particular about exam day that inspired you to write such a story? Are there any truths to scenes from the film?

Yes, the Exam’s story is a combination of my personal experiences at school and an actual story I had heard from a friend. I always wanted to illustrate the academic atmosphere I had experienced. When I heard about the real story about drug dealing at school, I decided to mix these two to write the script and recreate the situation and the actual characters. For me, going to school was all about restrictions and stress. In the movie, the school’s atmosphere was a reflection or metaphor of a controlled society and cultural crash, in which you could see the social failures’ symbols in the movie! While writing the script, I tried my best to make the story as close as possible to the reality I had experienced.

Was it a quiet comment on how society focuses on the ridiculous, taking attention away from the real issue, or a humorous way to build tension? Perhaps, both?

Everything that happens in the classroom, from the random bag check, checking the students’ appearance (eyebrows and dyed hairs), were all real events that I had personally experienced. These are quite common in public schools and sometimes even in strict private schools. Being so severe and strict with students may have been just for ten years ago, but I know that these rules still exist. When I was at high school, I remember that sometimes when we were out in the school’s yard for our break, the school principals would sneak into the classrooms and check our bags.

In your own life have you found yourself making decisions and taking actions that didn’t sit right with you and your own beliefs, simply to appease a supposed authoritarian?

We may all have experienced life in situations we did not like, or we were overwhelmed by a force we did not have the strength to deal with. I may have been in a similar situation and I have dealt with people and situations more powerful than myself, but not on a large and dramatic scale! Social and geographical determinism, prevailing conditions, and patriarchal society are perhaps the greatest elements that we all deal with in some way in most societies around the world.

For yourself and your cast and crew, was filming an enjoyable walk down memory lane, or were there moments of cringe worthy realization as you all reflected on your past selves?

A film project is a collection of good and bad events and nostalgia. I think the process of writing and filming the film is a very enjoyable and fascinating event, especially the story of the film “Exam” which was a reference to the educational environment and the space that I and the actors experienced and the representation of those images and environment for us at the same time. It was also very stressful to have fun!

While you were making this film, did you face any resistance or backlash?  Did it affect the way you approached the direction you wanted to take the film?

Fortunately, the process of making this film went very well and without any worries, and I owe this peace to my wonderful group. One of the strengths of this project was that each person was in the right place and had the duty to perform as well as possible. All of my factors are people who are patient and supportive, and by trusting me, my decisions make this film a successful film. Especially my producer, filmmaker and talented and good actors.

Do you believe that despite all our differences that we all share these universal experiences growing up? That we are united by our own growing pains?

I strongly believe that human experiences and pains and joys are very similar and it does not matter if you live in the United States or in a European or Asian country. The only difference is in the form of events and social tools and the impact of the prevailing environment. In addition, today’s technology and cyberspace have made us see and become more aware of these commonalities in human experience. These experiences can sometimes be disseminated through the internet and news, and sometimes through works of art such as movies and written stories!

Would you like to share with us what you hope audiences will take away from watching your film?

I like the viewer to wholeheartedly associate him/ herself with the moments and character’s experiences. I want the viewer to understand that a person’s decision can have a significant impact on the future and possible consequences, and any accident at any moment can fundamentally change a person’s life.

Can you expand on any future work we can look forward to from you?

These days, I am working on my next short film to shoot it in a month and write my feature film’s plot, which I have planned to make it in the next year in Iran again.